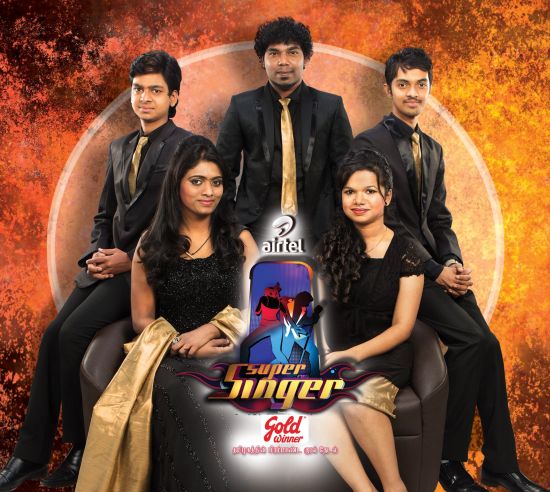 They have made the viewers sit glued to the television… They have risen to fame with their exceptional singing talent. They are none other than the finalists of the most popular reality voice hunt Airtel Super Singer 4 on Vijay TV.

Sarath Santosh (SS01), Dhivagar (SS10), Parvathy (SS09), Syed Subahaan (SS04) and Sonia (SS08), In 2006; Nikhil Matthew was the first person to win the coveted title of Airtel Super Singer. Followed by Krishnamoorthy in 2007 for the junior edition; Ajeesh in 2009 for the senior and Alka in 2010 in the 2nd edition for Juniors, Aajeedh in Super Singer Junior 3 in 2012. Now the time has come to crown the winner of AIRTEL SUPER SINGER 4 in 2014..!! Who among the talented five finalists would WIN the prestigious title and walk away with a grand prize Arun Excello presents 60 lakhs worth Apartment and the first runner up with V care Tricology Hair Clinic presents 1 kilo Thangam.

The final clash of the five finalists of Airtel Super Singer 4 would take place on 01 February 2014, from 6 pm onward at Chennai S P Golf Grounds, Interior Race Course Road, Guindy, Chennai in front of an audience of more than 10,000 and would beam LIVE reaching its diehard fans across the country.

The grand finale would be graced by legendary music composers and popular musicians from the South music industry. Many special performances by eminent singers await the viewers as well. The stage is all set for these most talented performers to redefine their dreams. Once again it is the viewers of Tamilnadu who would be choosing the most deserving singer of Airtel Super Singer 4 through mobile and online voting. The Judges of the show singers Sujatha, Srinivas, Unnikrishnan along with the Tamil film music industry would be seen to encourage and judge the talented young contestants.

Apart from this, viewers can also login to www.supersinger.in and cast their vote.

This excitement of music will be LIVE on Saturday, 01 February 2014, starting 6:30pm. Viewers do not miss to watch your favorite super singer perform for the coveted title one last time.