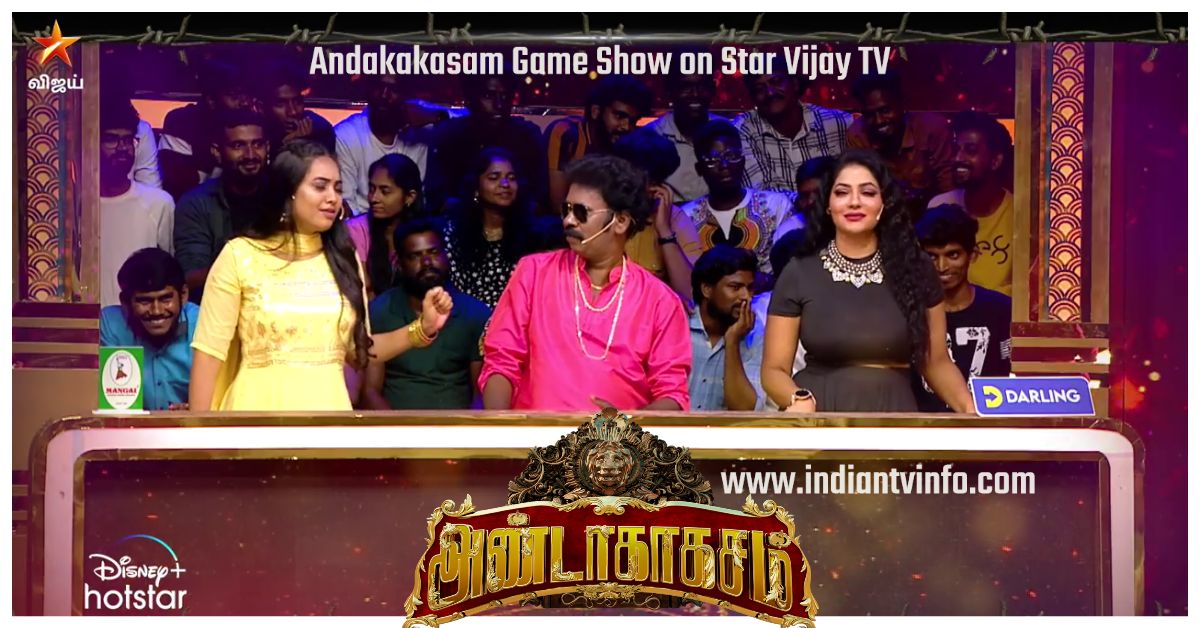 The Leading Tamil GEC Channel Star Vijay Is All Set To Launch An All-time Favourite Format Of A Game Show Titled Andakakasam (அண்டாகாகசம்). Non-fiction Formats And Game Shows Are Something That Star Vijay Is Well-off In Offering With Grandeur Making And In Terms Of Garnering Raving Response From The Viewers As Well. The Game Shows That Have Aired Earlier On The Channel Have Rocked And Maintained A Great Position On The Chart Before.

Two celebrity teams with 3 members each participate in the show. This fun-filled game show is hosted by non-other than Ma Ka Pa Anand.

Round 1:There will be a film-based quiz for the players in the first round at Andakakasam Game Show . The team which bets the maximum number of answers get to play first. If the team answers correct, they get a score point. The team that gets the max points gets the chance to enter the treasure room.

Round 2: A collage with various items is displayed on the screen. A participant must memorize the images within 15 sec. After the time out participants must recall the items they have memorized. If they lag out or repeat the item, they get disqualified and the other team wins the opportunity.

After winning round 1 & 2 they enter the Manthiraarai (slogan room) which is the most critical round. They get to learn the slogan from Tamil sage, rapper and old grandma in each round. The participants memorize the slogan, enters the treasure room and collects how much ever gift items, he/she can, within the given time. There are unimaginable luxury items kept inside the treasure room.

Eventually the participants must recall the slogan and recite it the same way it was taught to them at the exit gate to leave with all the prize, he /she has collected. If failed to say it correctly, he /she loses the prize collected and return to the team. Now this huge show is all set to launch from 14th August, Sunday at 1.30 PM. The show Andakakasam will have innumerable celebrities from Cinema, Television, & other fields playing the game. In the very first episode which is launching this Sunday have the following celebrities most of them well-known for their rib-tickling comedy; Ramar, Reshma, Pavithra, Kuraishi, Shrutika & Nakshathra.