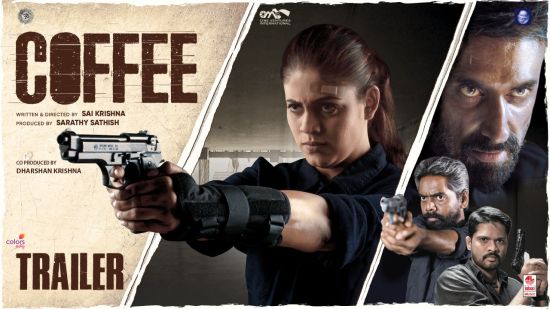 Directed by debutant Sai Krishna, the film features Actor Ineya playing the lead role, along with real-life couple Actor Rahul Dev and Actor Mugdha featuring in a Tamil film together, for the very first time for Coffee. The background score by music director Prasanna Bala elevates the experience of the film along with Venkatesh S as the DOP, Venkat Raajen as the editor, Durairaj G as Art director, Mohan Raj as lyricist, Viji Sathish as Choreographer, Don Ashok as Stunt Choreographer and Producer and Co- Producer being BR Sathish, and Dharshan Krishna respectively.

Despite having lost her parents at a young age, Sathya(played by Actor Ineya) never loses hope and aspires to become a cop. However, circumstances persuade her to become a cab driver and through this profession, she becomes the sole breadwinner of her only kin – her brother, Karthik in Movie Coffee.

One fine day, Karthik happens to land a wonderful job in Bangalore, but alas his happiness is shortlived as he discovers that he has fallen prey to a human trafficking ring, and gets abducted. Sathya soon begins her quest to find his whereabouts and stumbles upon the dark world of crime. Will Sathya be able to save her brother in the nick of time or will she lose the battle to the evil kingpin, Vikram (played by Actor Rahul Dev), forms the rest of the plot.