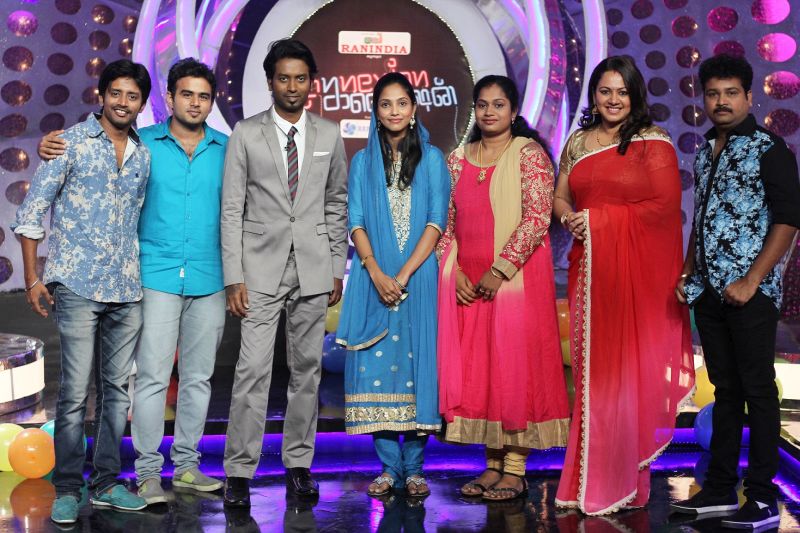 Connexion, the favourite game show of every household reaches its successful 100th episode on 11th October 2015. This picture based game show has featured all the popular VJs and RJs, small screen stars, actors Vijay Sethupathi, Prasanna, Oviya, VTV Ganesh, Vaibhav, Aadhi, Bindhu Madhavi and many others in the show so far.

It wont be out of place to mention that Connexion has won the Favorite game show award in the recently held 2nd Annual Vijay Television Awards. This is a viewers favourite show as they play along this game with family while watching it on television. The show is fun trend amidst college fests, corporate events, party games where it is played casually. And it is most popular for Jegan’s antics and usual witty way of anchoring.

Connexion game starts with the Round called One By Two. Each team takes turn to come to the center stage and faces the LED wall where a set of two images appear. They have to find the funny common Connexion (a word) between the two images. A Word that commonly connects the two images purely on a crazy way in spoken Tamil or familiar English.

The show progresses to the next rounds of Joint family, where the teams need to play picture dumbcharades. While Jagan will state the category of the answer the teams need to link an connect multiple images that indicate the name of a person, a place or a thing Connexion Vijay TV.

The next round Tent Kotta where only film titles and songs appear as images and the teams need to compete on buzzer to get the answer right.

The final decider is Panchathanthiram where anybody can win with a one hit one chance game Connexion Vijay TV. 5 image clues appear one by one and the teams can take one shot to find out who the personality is hidden in these 5 clues. Its just once chance to crack the answer. If wrong the team loses its chance and is out of the game and the other two teams compete.

It is not a complicated show as its sound but there is one condition. One has to see the show to understand and enjoy it with some common sense.Don’t miss to watch the exclusive 100th episode on 11th October, Sunday at 1 pm only on Vijay TV.