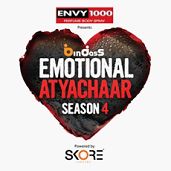 Emotional Ataychaar narrates a story of a brave woman, whose mistake will be a learning lesson for many

For the first time on Emotional Atyachaar, a mother’s support brings the daughter on television to expose a heart-rendering story

There are a few mistakes that people commit which turn out to be a learning lesson for many; however those mistakes do not break a person’s spirit to live again. Something similar happened with Anupam, a 40 year old divorcee. Due to unpleasant situations her marriage broke, but that did not demoralize her ambitions. Post her divorce, she persuaded her dream to become an actress.

One fine day, she happened to attend a Page3 party with her journalist friend. The party not only gave her a glimpse into the industry, but also made her meet Paul, a handsome charming model agent. They both instantly clicked and their association grew from a mere acquaintance to friendship which eventually progressed into a relationship. S ince Anupam recently came out of a broken marriage, she did not intend to get into another one immediately. She looked upon Paul has a mentor and followed his guidelines for her professional growth. Due to uncanny occcuring, Paul’s landlord asked him to vacant the flat which left him homeless. Out of empathy Anupam, allowed him to stay with her.

Their relationship sailed smoothly, until Anupam noticed peculiar changes in her life since Paul moved in with her. There were many suspicious instances, like her loyal maid was convicted of stealing her jewellery; Anupam’s health condition started deteriorating. Situations worsened for Anupamas not only her personal life was at stake but also her professional career was sinking. In her quest to settle and stabilize her life, Anupam decided to investigate the root of all the problems.

Within few days, she came across shocking revelations about Paul which left her completely shattered. What was Paul’s real truth? Did Paul conspire against Anupam? Amidst these awkward encounters, Anupam’s mother stood like a pillar beside her. It was only because of her strong support that Anupam managed to sail through the problem and expose Paul’s reality on television.

To find out Anupam’s complete story tune into ‘Emotional Atyachaar 4’, this Saturday, 7th December 2013, at 7pm only on bindass!

Index Show
Emotional Ataychaar narrates a story of a brave woman, whose mistake will be a learning lesson for many
Read Also