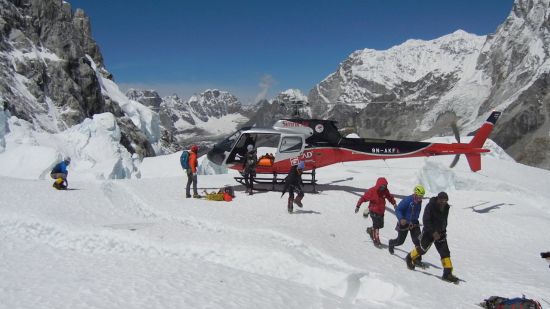 Discovery Channel will broadcast a 90-minute programme titled Everest Avalanche Tragedy on 29 May 2014 at 8 pm. The programme will include unprecedented access and eyewitness accounts from the rescue and recovery efforts that took place after the avalanche struck the Khumbu Icefall, the area just above Mount Everest base camp, during the morning of Friday, April 18 this year, killing 13 and leaving three missing.

Everest Avalanche Tragedy, produced by NBC News’ Peacock Productions, will document the weeks leading up to the climb through the moment the avalanche struck the Khumbu Icefall, one of the most treacherous parts of the mountain, and its aftermath. Cameras rolled immediately following, as blocks of ice plummeted down the mountain, making it the deadliest single-day avalanche in history on Mount Everest.

The programme will feature highly emotional and real time footage, capturing the mobilization efforts of Sherpas and rescuers as they rushed to search for survivors. Through eyewitness accounts, viewers will hear from those who experienced this horrible tragedy and aftermath including sit down interviews with Joby Ogwyn; Expedition Leader Garrett Madison, who played a critical role in the recovery; Todd Burleson, President of Alpine Ascents International who lost five Sherpas and other key members of the expedition and production teams.

The programme will serve as a tribute to all the Sherpas and their families affected by the tragedy. Discovery will be contributing to the American Himalayan Foundation Sherpa Family Fund, which gives 100% of all donations to help families of the deceased. To make a donation, visit http://himalayan-foundation.org/blog/119010.

Everest Avalanche Tragedy will be followed by a 30-min special BEAR GRYLLS: EVEREST AFTER THE AVALANCHE at 9:30 pm. Trailing the tragic avalanche that occurred on Mt. Everest April 18, 2014, BEAR GRYLLS: EVEREST AFTER THE AVALANCHE dissects the dangers and disasters of the mountain, through an insider perspective from Bear himself. In this programme, Bear draws on his own experience as an Everest summiteer to share with viewers the danger and the allure of the world’s highest mountain, which was filmed following the disaster.