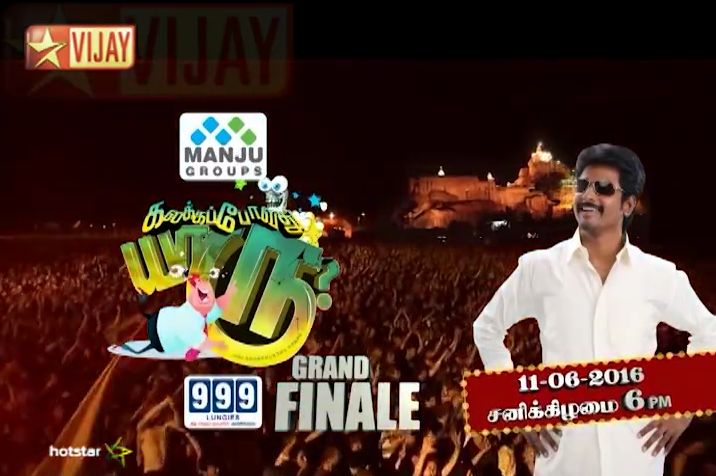 Get ready to witness a laugh- riot! Most talked about Tamil comedy show, Kalakka Povathu Yaaru Season 5 is coming to an end. As the show has got a great response, for the first time ever, the grand finale is all set to happen in the midst of 5000 people at CARE College, Thayanoor Village, Tiruchirappalli on June 11th, from 6 pm onwards. It’s a golden opportunity for Trichy audience as they can Witness the live hilarious acts. Tickets are available in your nearest Showrooms like Chennai Silks, Bommy’s Nighties and Ramraj Cottons.

Kalakka Povathu Yaaru Season 5 is a Tamil comedy Show which has been successful in all its 5 seasons. The show has witnessed great talents right from the beginning. Remarkably, Actor SivaKarthikeyan who started his career as a Stand up comedian in the Show and was a title winner as well. He will grace the finale of the show which gave him the Spot light and fortunately it is taking place in his native land Trichy. Various Comedians from the Film fraternity will be seen enjoying and encouraging the contestants during the Grand Finale.

After a yearlong hard work they have put in to entertain both the judges and the audience, the people who made it to the Grand finale are Mullai, Kothandam, Deena , ‘Aranthangi’ Nisha, Sathish, Naveen, and Mohamed Qureshi. The finalists are now gearing up to tickle your funny bone with a great act. The event will have a line up of hilarious acts including judge’s special acts.

The anchors Rakshan and Jacquline, who were a great support throughout the season, as they were equally performing along with the contestants in every act. Now they are set to enthrall the audience with their live act. The grand finale event will have two Competitive rounds- one solo round and Dual round.