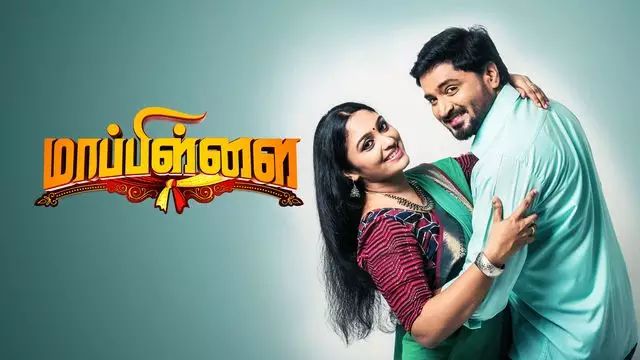 One Popular fiction airing in Vijay television is Mapillai. The serial airs every Monday to Friday at 9 PM. Usually in Tamil television fictions the leading lady of the house are meant to heal wounds and bind all the members of the family together. But this fiction Mapillai is based on a unique plot and it breaks all the clichÃ© concept.

The female lead character Jaya Chandra is a straight forward working woman, whose family is dependent on her salary. While, Senthil is an easy going, Fun loving guy from an affluent family. Usually in Tamil fictions, the female lead is never shown holding a higher position in work place than their love interest. Senthil works under his female boss Jaya Chandra, after which these opposite poles gets attracted to each other and love blossoms between them. The lead actors are Mirchi Senthil and Sreeja. After they tied the knot, the reel turned real life couple has paired up for the first time through this new fiction Mapillai.

Now the fiction has come to a turning point where Jaya and Senthil has to confess the truth that they were hiding from each other. Jaya was lying to Senthil that she has a twin sister called Maya. She did that just to befriend Senthil and make him understand her. On the other hand, Senthil has to confess that he met a girl for his alliance, even though Jaya warned him not to meet anyone. And the girl is none other than Jaya’s elder sister. Every episode till February 6th will have a twisted endings. Wait and watch how they confront the bitter truth from their loved ones.

Don’t miss these interesting episodes of Mapillai this week. It is going to be aired as a special Maha episode for one hour from 9 pm onwards. So Don”t miss it!