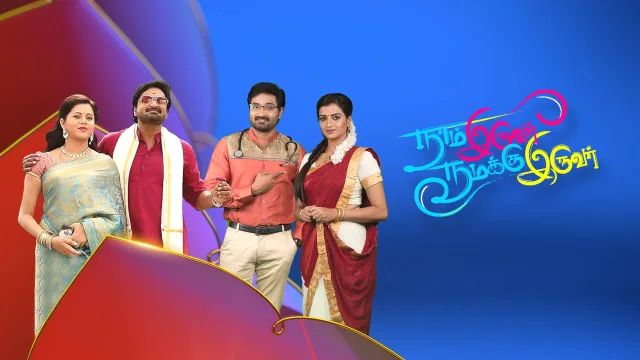 Vijay television is strengthening its fiction line up of programming by launching new fictions in the last two months. Naam Iruvar Namku Iruvar is an upcoming new family drama, which is all set to get launched on March 26th, every Monday to Friday at 6.30 pm. So far, we have seen lot of serials about the relationship between Mother-in-law and Daughter-in law, Sisters, Friends and many more. Most of the serials revolves around the life of a women. For a must needed change get ready to watch a serial based on twin brothers.

In this story, Arvind is urban based Doctor, while his twin brother Mayan is a jobless easy going youngster from village. They haven’t seen each other since birth, as Arvind was handed over to a childless couple, so he was brought up in a city and educated as well. So, after 30 years, When Arvind gets to know that he was adopted, he wants to meet his parents, so sets to visit them for the first time. This is where their lives take a turn. What would happen when two people who look similar in appearance, but varying characteristics meet?.

Along with them, two other interesting characters as leads will be traveling along with them in this fiction. Devi, a modern girl hailing from a rich family. On the other side, Thamarai is an Innocent girl from a village.The dual characters Arvind and Mayan will be played by the super talented television actor Senthil. His notable serials are Saravanna Meenatchi, Madurai and Mapillai. Actress Raksha, who recently played the role of Ajamugi in Tamil Kadavul Murugan will be seen playing the role Devi in this fiction. And actress Reshmi will be playing the role of Thamarai. The fiction is directed by Thai Selvam. The fiction will be an amalgamation of Fun, Emotions and drama. Don’t miss it