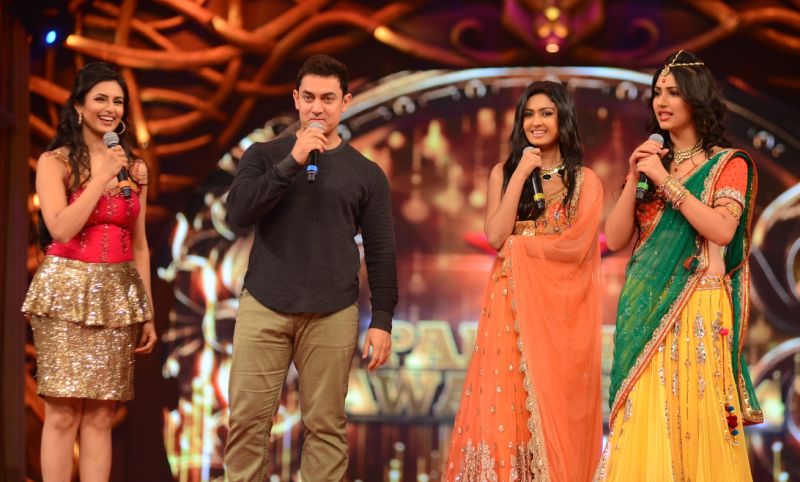 Star Parivaar Awards 2014 On Star Plus

Star Parivaar Awards this year was a star studded event with many known faces not only from tellyland but also from Bollywood in attendance. The show as promised was truly unconventional with never-seen-before acts and grandeur performances. The host for the night Nakuul Mehta aka Aditya from the show ‘Pyaar Ka Dard Hai Meetha Meetha Pyaara Pyaara’ came down on stage in a flying plane and his entry was nothing short of spectacular.

The show thus started only with Nakuul’ out of ordinary entry and later what followed was 4 hours of non-stop entertainment and maverick, dare-devil performances. Digangana Suryavanshi aka Veera and Shivin Narang a.k.a Rannvijay were seen rollerblading on stage. “We practiced for this act separately. While I was in Poland, Shivin was in India practicing on his own. Therefore performing on stage together for the first time and getting the coordination right was scary for both. But I am glad we managed perfectly and this was special for us and a give back for all the love we receive from our audiences.” said Digangana.

also left the audience awestruck with her bike act. Just like on the show, here too Sandhya wanted to break the confined boundaries and do something out of ordinary as she loves challenges. So she does a bike act which leaves the audience astonished and thoroughly impressed. There was also a splendid act by the Victory Art foundation which had kids perform on wheel-chairs.

Plane, Fire, Bikes, Rollerblades, Magic Tricks, Trampoline, Acrobats, A Good cause, Laughter, Entertainment, Nach, Gaana, Do the Namaste Anthem and Stars, this Award show had it all. Star Parivaar is truly a big, warm family which knows how to entertain.