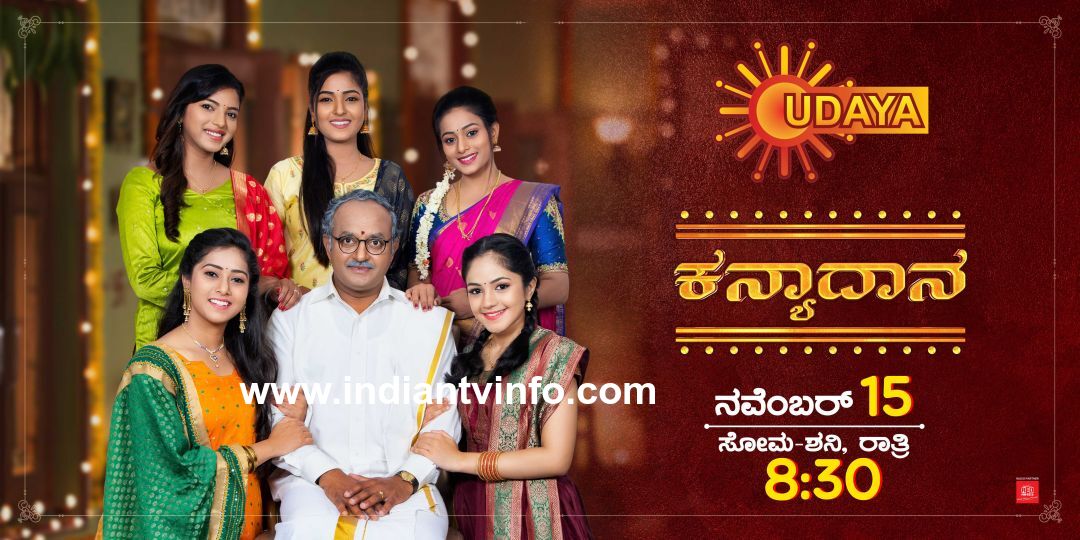 Every Monday to Saturday at 08:30 PM – Latest Kannada Serial Kanyadana

Udaya TV Premiering it’s Latest Television Serial from Next Week onward’s.It’s the Adoption of Metti Oli, One of the Popular South Indian Serial. Kanyadaanam (Telugu) – Gemini TV – Kanyadhanam (Malayalam – Gemini TV) are the Other version of the show currently airing on other Sun Network Channels. Show handling the story father having 5 daughters, who faces various challenges in life. Major update happening next week on Udaya TV is the launch of this serial, Manasare will finish this week.

Udaya TV which always strives to give newness in its shows, will now add a sheen among its existing serials!. Udaya TV is adding another serial Kanyadana to its bouquet. Gowripurada Gayyaligalu, Netravathi, Sundari, Kavyanjali, Nayanataara, Sevanthi, Kasthuri Nivasa, Ee Bandhana, Nandini , Aramane, Sarayoo , Kadambari, Ninnindale are the Serials Going on. Kanyadana Kannada Serial Scheduled at 08:30 PM to 09:00 PM, Kaavyanjali Currently running at this time slot.

As mentioned above Serial Manasare concluding this week, there will be some arrangements at Prime time program timing of Udaya TV. As per latest Kannada TRP Reports channel listed as 4th Popular Karnataka GEC, They just few points lower than Star Suvarna.

We have already reported that Senior Artist Mico Manju plays the father’s Role and His Character name is Ashwatha. Archana as Nirmala, Keerthi as Bhavana, Manasi Narayan as Archana, Prarthana as Aishwarya, Vidya Deepika, Yashashwii as Chitra are in supporting Star cast of the Show. Sushmit Jain as Karthik also appearing in the Latest Kannada Television Serial. As Usual Sun NXT Application

will stream Today Episode Online, It will be Free for All users.

Arun Hariharan, who has directed the Serial under the production of Anjali Ventures, being enthusiastic about the show says “this serial story is different than any other existing stories, as they offer two rare pairing combos in the show!!! One pairing combo is of the Father with his 5 daughters and the other pairing is of strong story with its screenplay. This story has all the necessary ingrains to win the hearts of the Kannadigas!” he boasts.