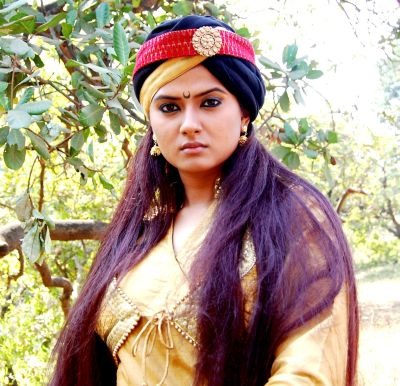 The brief for Kratika Sengar when she was roped into play the title role in Zee TV’s Jhansi Ki Rani was to look strong, sharp and aggressive at all times – like the legendary freedom fighter who led India through its first war of Independence!  However, with her natural good looks, one cannot help but notice how dusky Kratika has ended up adding her own sensuous quality and rare beauty to the Rani’s otherwise powerful, formidable aura.

Check out, for example, her latest look as the warrior queen who unleashes guerilla warfare on the British forces in a bid to re-capture the fort of Jhansi. The wild mane, the kohl-laden eyes, the sharp teeka on her forehead, the impressive headgear, the black and gold war uniform are all extremely becoming of Kratika sengar latest images, who’s looking like a million bucks these days!. The current track will see the Rani in disguise taking refuge in the jungles covering the outskirts of Jhansi. It is here in the jungles where she will strategise her attacks at the same time attend to her subjects in guise ala Robinhood of Sherwood forests which will help her build a formidable army.

“The crew on the set have been raving about the guerilla warfare look ever since I did my look test. They think I am looking my best in this avatar. Let’s hope the audience is impressed just as much!” said a humble, grounded Kratika.With such a gorgeous queen engaging the British troops in a mortal combat, one wouldn’t blame them if they were distracted by her stunning beauty. Good for you, Rani. Jhansi is all yours!

Stay tuned to ‘Rin salutes Jhansi Ki Rani’ at 8 PM, Monday-Friday on Zee TV for the most exciting war sequences between the Rani and the British!