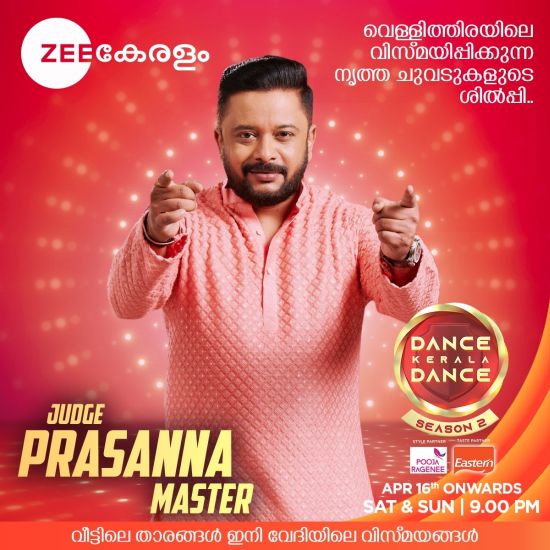 I was sad that I couldn’t be a part of the first season of Dance Kerala Dance , Choreographer Prasanna Master. Prasanna Sujith aka Prasanna Master is one of the ace choreographers in Mollywood. He has been in the industry for over 20 years and has bagged the prestigious Kerala State awards. From a stunning choreographer to a stylish reality show judge, his journey was unique.

He is now a part of the judging panel of the most favorite dance reality show ‘Dance Kerala Dance Season 2’ of Zee Keralam. Recently, he shared his experience and his journey as a judge with Zee Keralam.

1. How does it feel to be back on television as a judge after a short gap?

It is a very happy feeling to come back to the television for a dance show. We were all trapped inside the house for the last two years due to the pandemic, but this reality show gives a different feeling. It gives me immense pleasure to be a part of a Zee Keralam show.

2. Tell us how different is DKD?

The contestants make the show different. The audition levels of the show itself was really big and the participants are trying to mold themselves for the show day by day. The whole ambience of the show; director, anchors everyone adds a very chilled out mood to the show and that’s what makes it unique.

3. What excites you about DKD

I am very happy to be a part of Dance Kerala Dance, the No. 1 reality show in Kerala. Unlike other shows, the show features talented artists between the ages of 6 and 60, who defy limits of their age. The young participants of the show add on to the entertainment factor, yet showcases their talent in the best possible way.

5. About working with Zee Keralam

6. Can you tell us about the unique category of participants of DKD Season 2?

The kids are the highlight of the show and are a threat to the elders. They are very sharp, immensely talented, raw, and energetic. Many of them have shown spectacular performances for the first auditions itself. Their performance will be a challenge for the other category of participants.

I have known Mia for a long time, she is an ever smiling and talented human. We are very close friends. Although Aishwarya is a new face to the Malayalee’s, this show is going to have the most fans for her. She is a Malayalee choreographer who has mesmerized the country with her excellent dance performances. Shilpa and Arun being the anchors create an aura that reflects in the episodes. They are very entertaining and enthusiastic and that keeps the show engaging throughout.

Dance Kerala Dance Season 2 show is Telecasted on Saturday and Sunday at 9:00 PM on Zee Keralam.