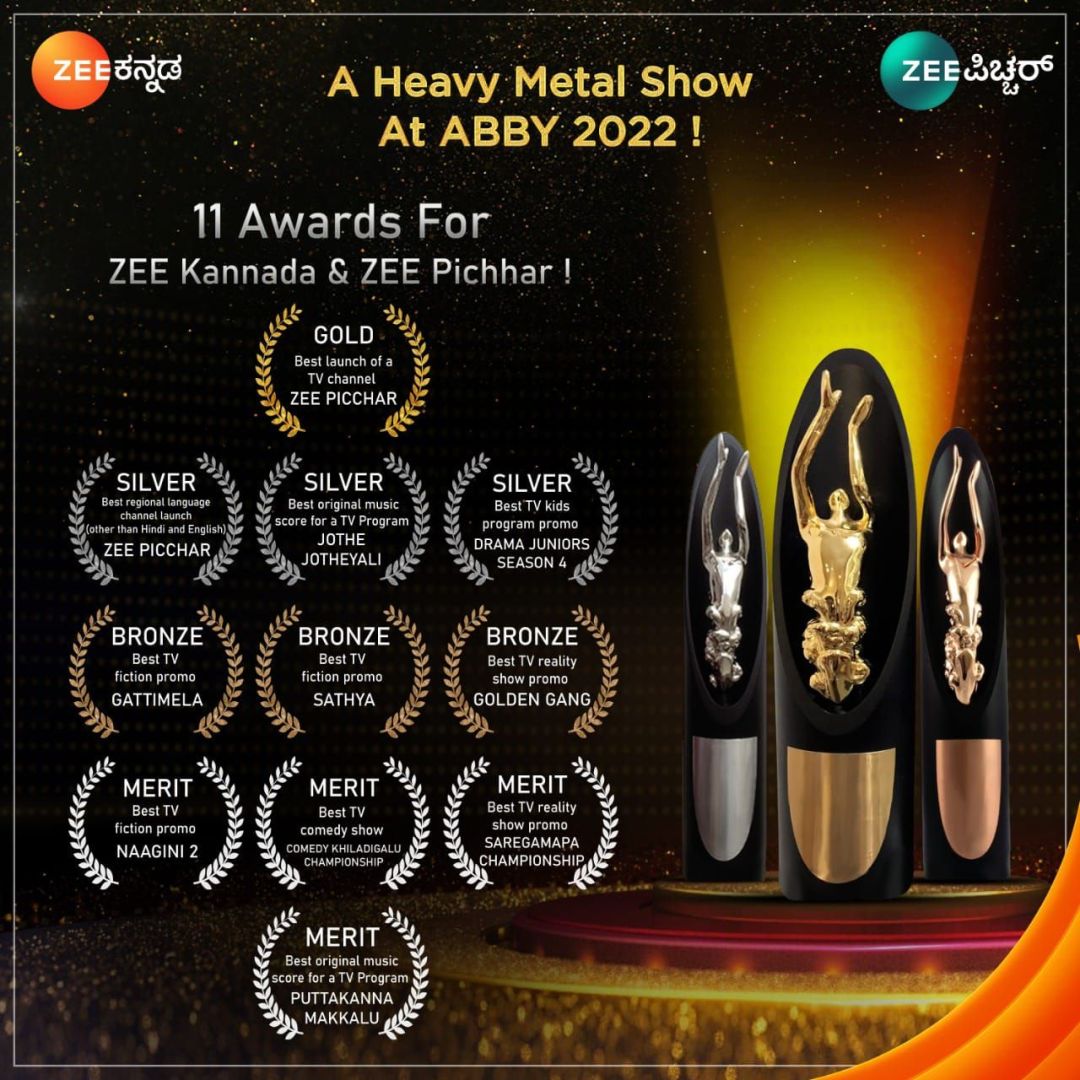 It rained Gold, Silver, and Bronze for ZEE Kannada and ZEE Picchar in their very first outing at the ABBY SOUTH ASIA 2022 at the Goa Fest. ZEE Kannada, which has been entertaining the viewers for more than 15 years now, is proud to have bagged eleven awards for its excellence in various categories at the prestigious ABBY 2022. From best launch of a TV channel to best regional language channel launch for, best original music score for a TV program, best TV kids program promo, best TV fiction promo, best TV reality show promo, and best TV comedy show, Zee Kannada and Zee Picchar took home some prestigious title from the event.

Bringing in a new flavour of content and taking the entertainment quotient to the next level, ZEE PICCHAR was awarded a ‘gold’ in this category.
Best regional language channel launch – ZEE Picchar

ZEE Picchar added yet another feather to its hat as it secured ‘silver’ in the above-mentioned category.

The daily soap Jothe Jotheyalli won the ‘silver’ award for its original music score. Zee Kannada’s most-popular show, Jothe Jotheyalli, resonates as a household name for avid Kannada fiction show viewers. Based on an unconventional love story of a couple belonging to different generations, the show was an instant hit when it was launched in August 2019. The original title track, which has garnered 29M views across all platforms, wowed the audience and helped the show become a cult classic. Jothe Jotheyalli went on to break all the previous records set by older shows as it topped the fiction charts of the Kannada television industry.

The title track was also released as a caller tune for subscription on Airtel, Vodafone, Idea, BSNL, and OTT platforms, amidst popular demand by the fans of the show. The title track of the show has been viral for several months, witnessing downloads from other States such as Tamil Nadu, Hyderabad, and Maharashtra. This further encouraged the channel to reintroduce the song as an official video track of 3 minutes 30 seconds in January 2020.

The promo for Drama Juniors season 4 featuring Crazy Star Ravichandran, Rachita Ram and Lakshmi was high on entertainment and stagecraft and it helped Zee Kannada bag the ‘silver’ in the best TV kids program promo category.